Accueil > Gastronomy and art of living > Mougins, capital of gastronomy

For many years, the history of Mougins has been closely linked to that of French and even international gastronomy. Since 2012, Mougins has been the only town in France to be awarded the “Ville et Métier d’Art” label for gastronomy!
r

It all began in the 1950s, when Célestin Véran, a cook in the French navy and then a fisherman in Cannes, quickly realised that tourism would develop. He transformed his boat into a “taxi de la mer”, and while fishing, he took rich and idle Englishmen who had come to spend the winter in the mild sun of the Côte d’Azur. Little by little, his customers got into the habit of “going up” to Mougins to taste his famous bouillabaisse prepared with freshly caught fish, and they discovered the gentle way of life of the village, the freshness of the small shady squares.

Mougins in the land of stars

In 1969, the chef Roger Vergé, a native of the Allier region, settled in Mougins. With his wife, Denise, he opened the restaurant Le Moulin de Mougins, on the site of the old oil mill of the village where Célestin Véran, the fisherman-cook, used to improvise good dishes for those who were there.
Roger Vergé’s debut at the Moulin de Mougins took place on a Whitsun Sunday, the menu was 28 francs (just over 4 €) and delicious, but no one had any idea that this new address would propel Mougins into the land of high gastronomy. However, it soon became a success and the first star in the Michelin Guide was awarded in 1970, only one year after the opening, a record! 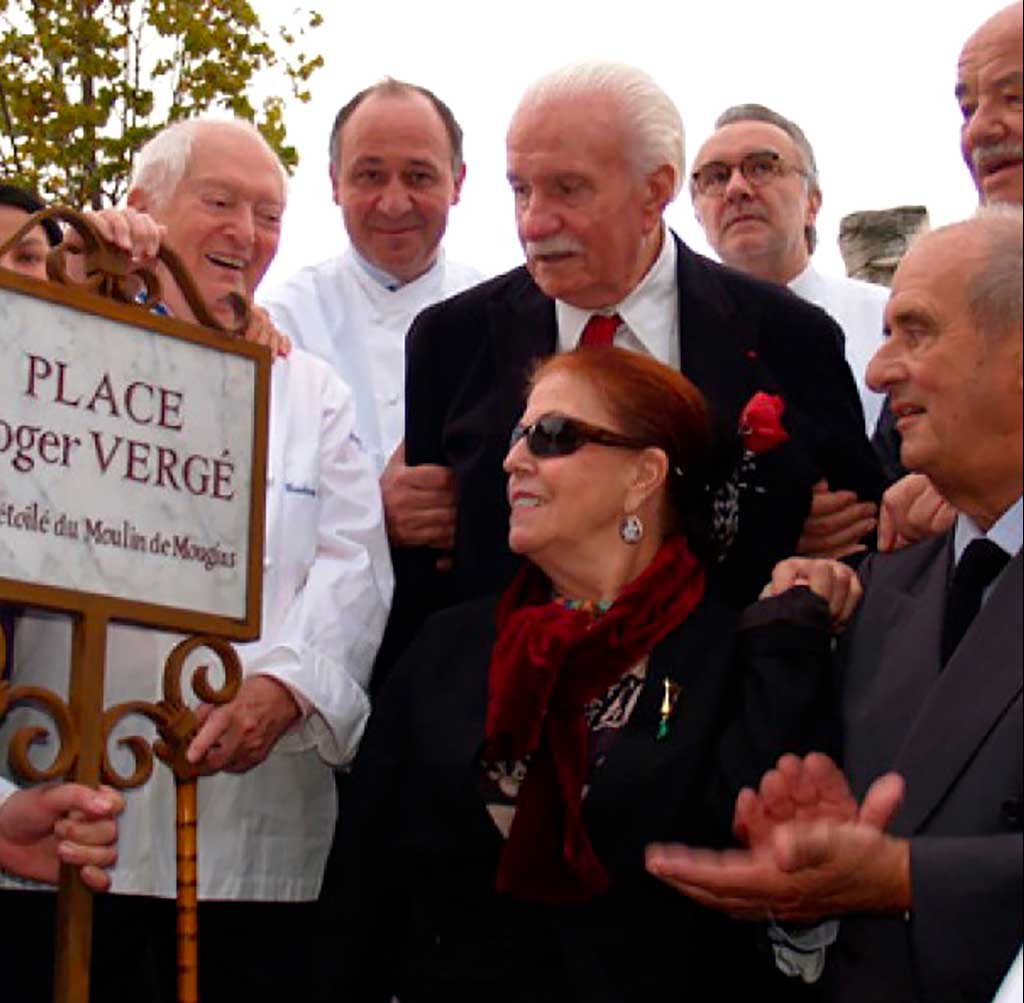 The second star was awarded in 1972 and the consecration came in 1974 with the third star. The restaurant became famous and attracted artists and celebrities from all over the world who frequented the Côte d’Azur. In 1977, Roger Verger also opened the Amandier restaurant, which still exists today and welcomes you at the entrance to the village with its famous panoramic terrace. He too was awarded a star. A true precursor, Roger Vergé dusted off and lightened French cuisine. He invented “La Cuisine du Soleil” in Mougins, taught it in his cooking school at the Amandier, and made it known throughout the world, contributing to the development of French gastronomy. Later in the 1970s, André Surmain, the charismatic former chef of the Lutèce in New York, then considered one of the most famous restaurants in the United States, fell under the spell of Mougins. Together with his wife, he opened Le Relais and Le Feu Follet and trained a number of future great chefs in his kitchens, weaving the international gastronomic reputation of the village with Roger Verger.

In 1992, Mougins had 7 stars in the Michelin Guide and was the most starred village in France! In 1994, during the Cannes Festival, the amFAR chose the Moulin de Mougins to host its prestigious charity gala. The greatest international stars met at Denise and Roger Vergé’s table in Mougins. Many of them became loyal guests, seduced by the combination of talent, high standards, elegance and conviviality characteristic of the Vergé couple.

Still today, about fifty restaurantsof local, bistronomic and gastronomic cuisine contribute to the gastronomic reputation of Mougins, both in France and abroad. 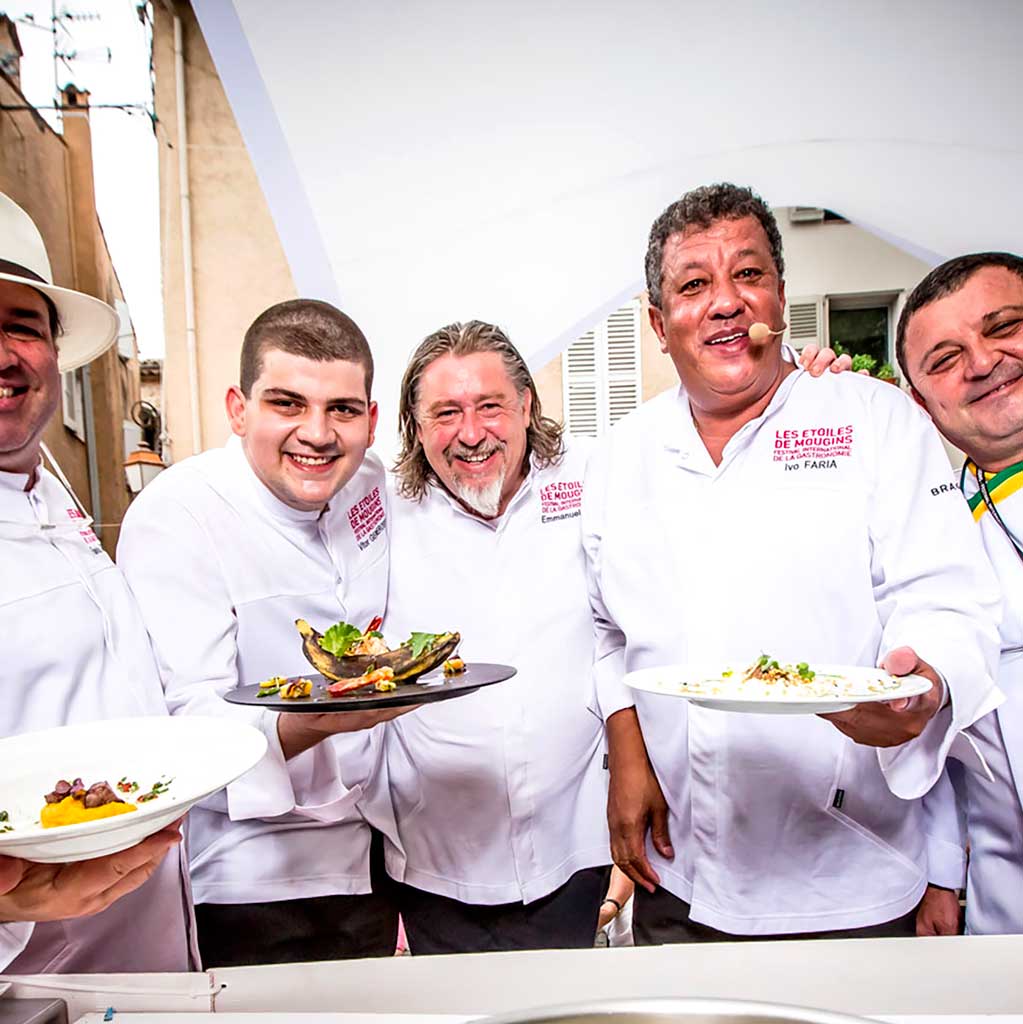 • The International Gastronomy Festival, the “Étoiles de Mougins” (The Stars of Mougins)

In order to pay homage to the chef Roger Vergé, in 2006 the Mayor of Mougins, Richard Galy, decided to create the very first International Gastronomy Festival, the “Étoiles de Mougins”.

The first edition, in the presence of the giants of gastronomy Paul Bocuse, Pierre Troisgros, Michel Guérard, Gaston Lenôtre, Roger Vergé and Alain Ducasse, was a huge success. Over the course of a weekend, the old village is transformed into a true open-air theatre of taste.

The event is very popular. Year after year, “Les étoiles de Mougins” becomes the place to meet and exchange ideas between chefs from France and all over the world. They come to share their recipes and secrets with a passionate public who can rub shoulders with them in an atmosphere that is both chic and friendly.

In April 2019, “La Brigade des Étoiles de Mougins” is born. It is made up of some fifty French and foreign starred chefs, ‘Meilleur Ouvrier de France’ chefs with prestigious blue-white-red collars. They are now ambassadors for Mougins and French gastronomy in their establishments and on their many trips around the world.

To find out more about this exceptional event, go to the dedicated website:lesetoilesdemougins.com

This website uses cookies to improve your experience while you navigate through the website. Out of these, the cookies that are categorized as necessary are stored on your browser as they are essential for the working of basic functionalities of the website. We also use third-party cookies that help us analyze and understand how you use this website. These cookies will be stored in your browser only with your consent. You also have the option to opt-out of these cookies. But opting out of some of these cookies may affect your browsing experience.
SAVE & ACCEPT
Share This