Walk in the heart of the old village

Walk in the heart of the old village

A walk in the heart of the old village is essential in Mougins. Lose yourself in the age-old alleyways and enjoy this melting-pot of charm, history and art.

From the Lavoir, head for the fountain that has stood at the intersection of Victoire and Commandant Lamy avenues since 1894. On your left, you will notice the restaurant “Au Rendez-vous de Mougins”, a former Hotel de France with a vaulted room on the first floor which was used as a court in the 15th century, in accordance with the Charter of 1438 stipulating that the Mouginois would be judges in their commune.
Opposite, the premises of the former post office, built over the cistern and outbuildings of an oil mill, adjoin the restaurant “Le Bistrot”. 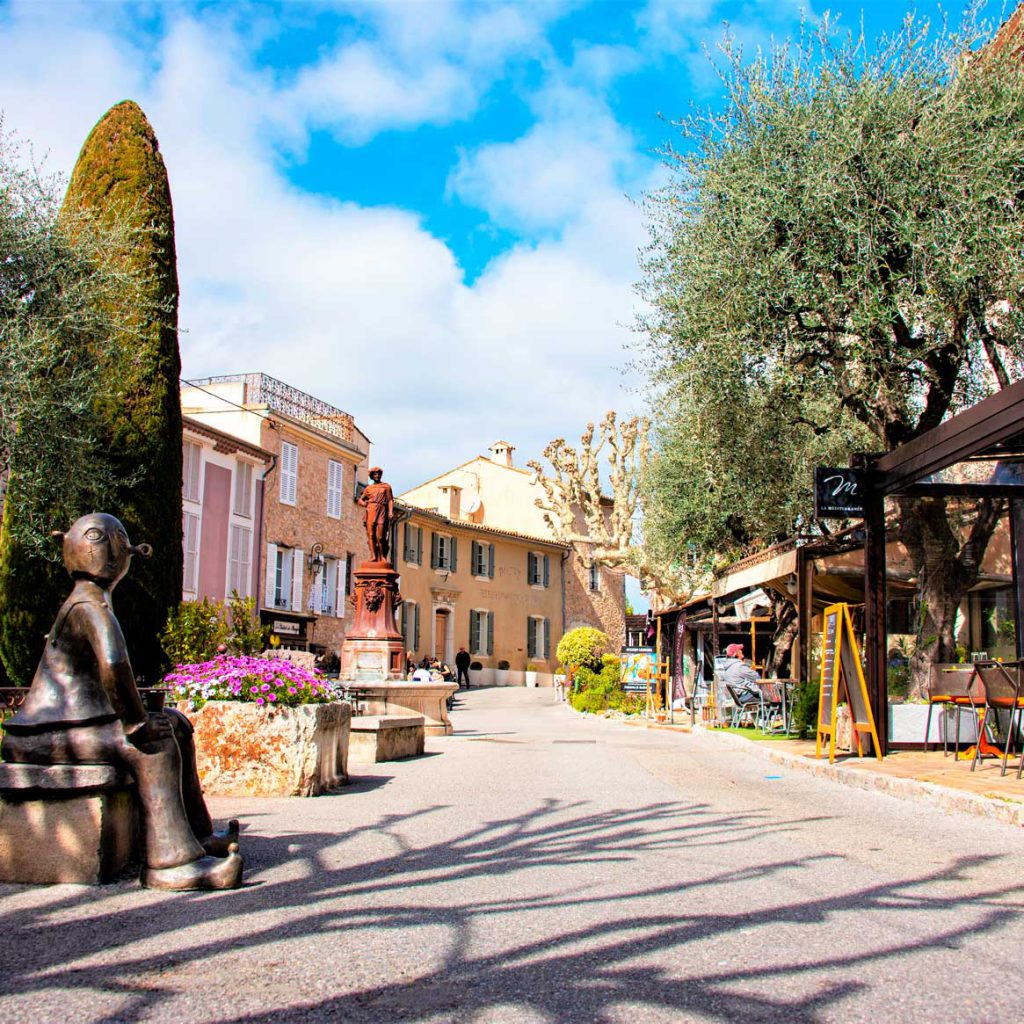 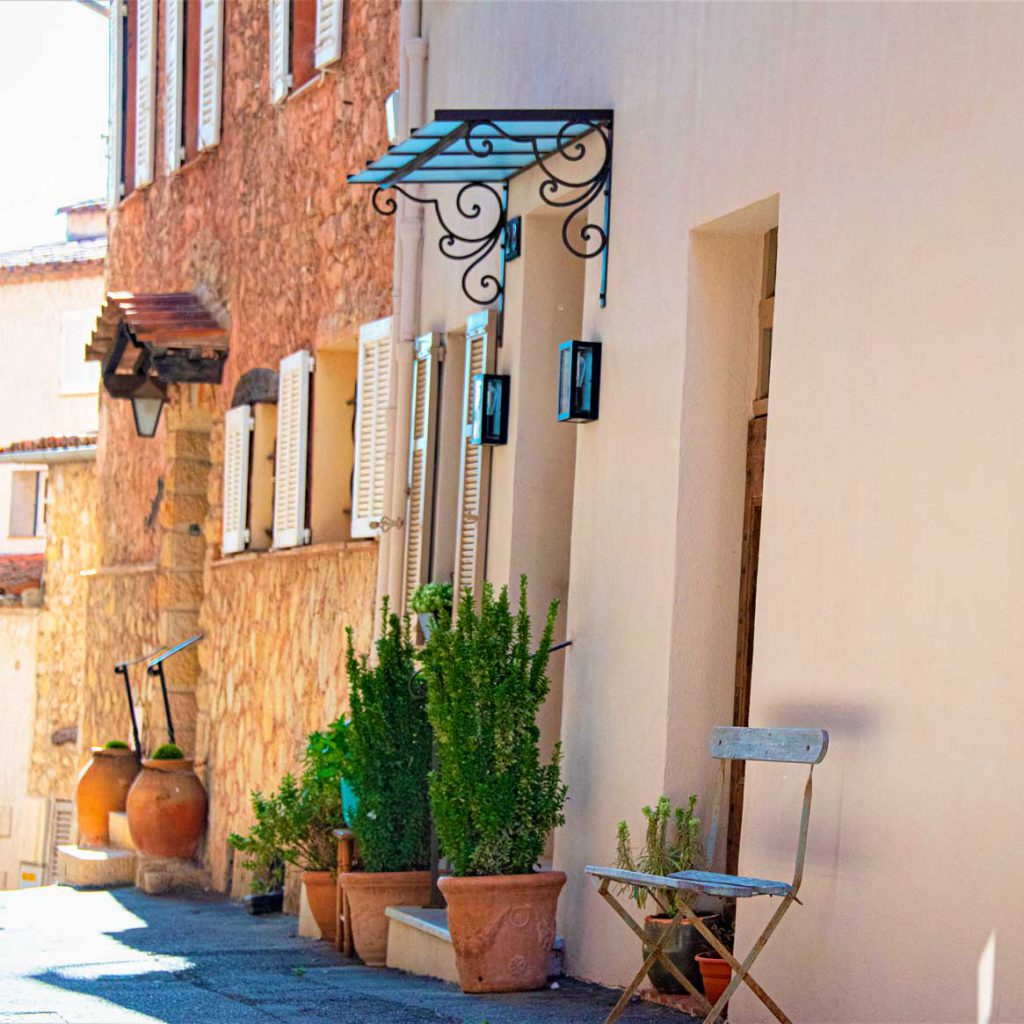 Henri de Badier was Treasurer General of the Generality of Provence. This alleyway “outside the walls” originates under the Saint-Bernardin Chapel (formerly the Town Hall) and ends at the covered passageway of the former Saint-Jacques Hospital. There was a flour mill as well as an oil mill known as the “blood mill” opposite one of the last bread ovens in the village. At the corner of this street and that of the Migraniers, is the house of Maurice Gottlob, who was a country warden and above all a well-known painter in our region. He had set up an art ceramics factory here. Translated with www.DeepL.com/Translator (free version)

Formerly known as the Place des Peyroues, it was the place where the stills were set up to distil the “aîgue Ardent”. One of the two fountains of the village and a watering place for the horses were located on this square. At number 26, magnificent paintings dating from 1510 were recently discovered (frescoes representing the white penitents). On your right, the rue de la glissade. Let yourself be tempted… 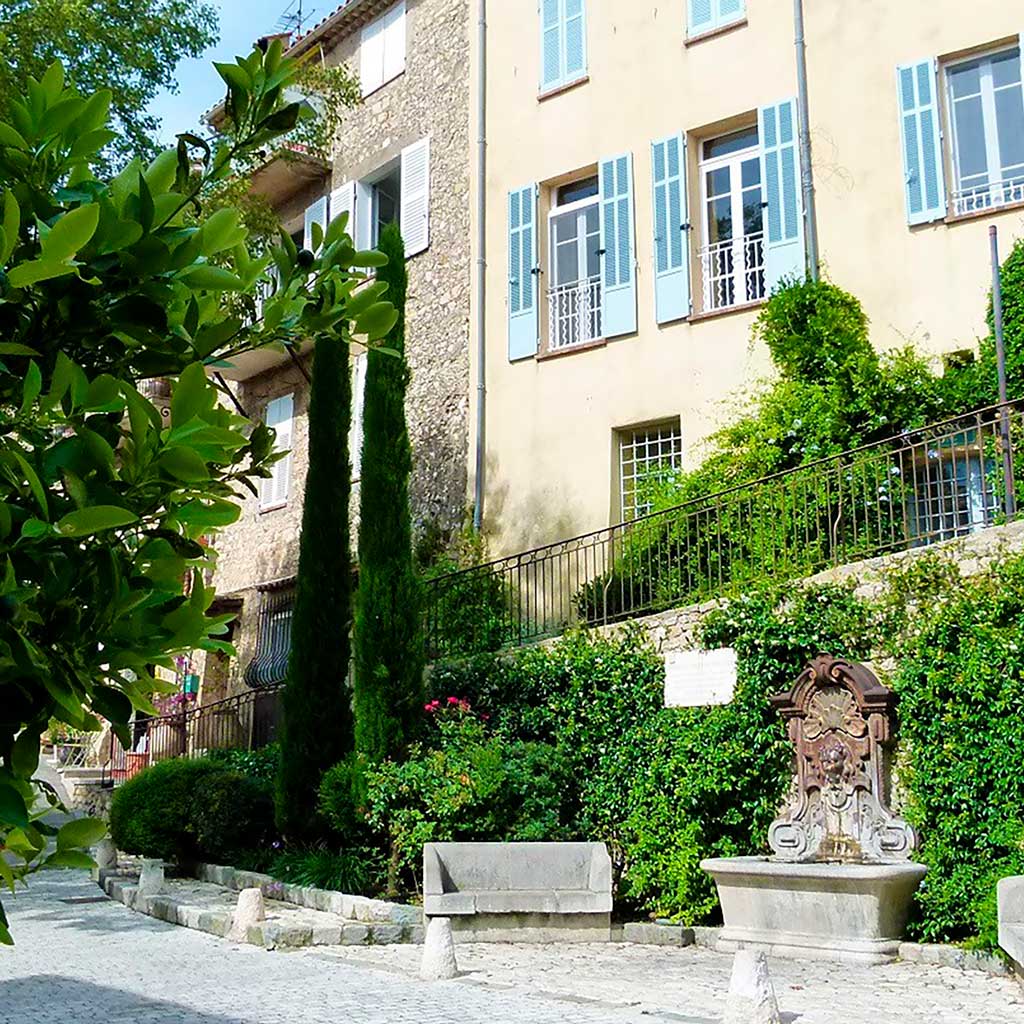 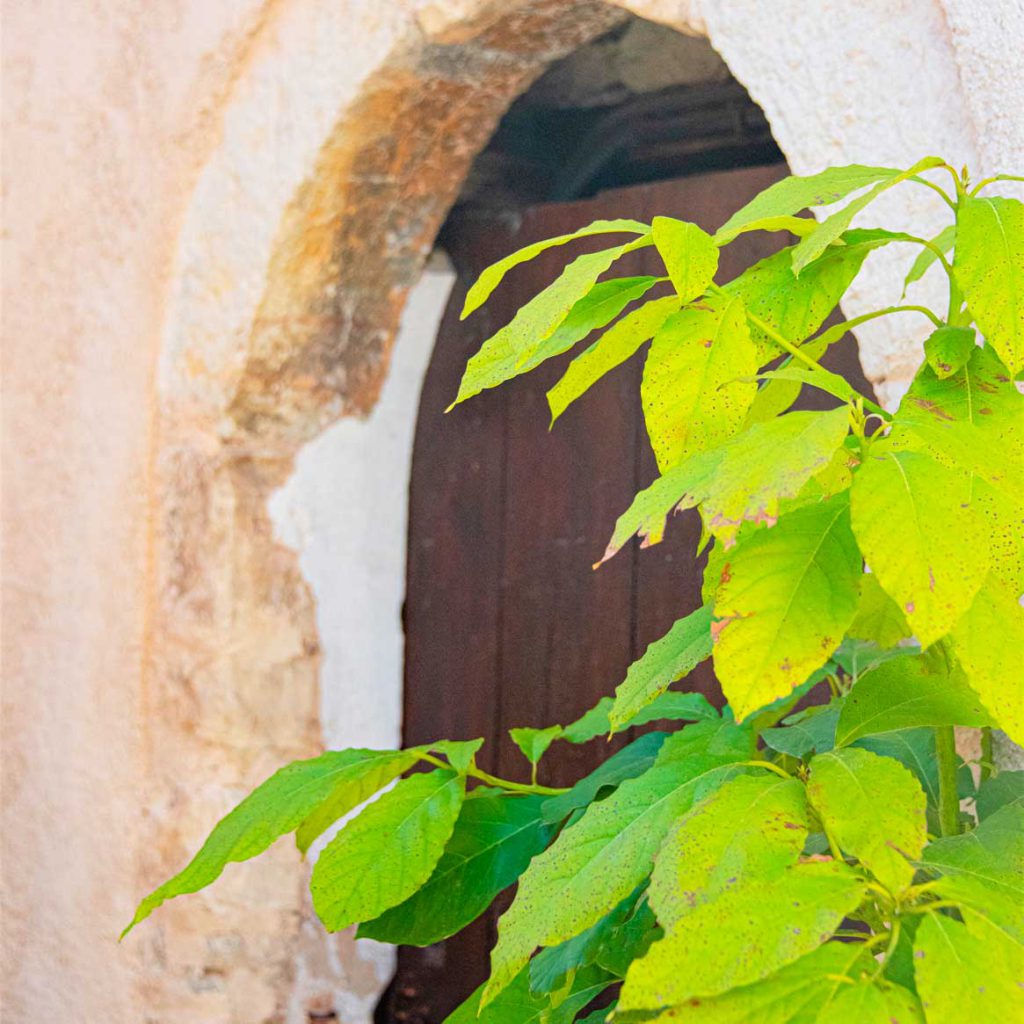 It is the old passage from Mougins to Le Cannet, Antibes, Valbonne and Vallauris. The Mouginois had given it the name of “Roumpe Cuou” because of its very steep slope. Under the covered passage, you can see an old press screw from an oil mill (now rue des Vanniers). Turn left into Rue des Isnardons, which borders on its western side the hotel “le Vaste Horizon”, which once welcomed Picasso and other artists on holiday in Mougins. Translated with www.DeepL.com/Translator (free version)

It was in this old hotel that, one fine morning in 1936, Picasso left his suitcases and fell in love with Mougins. He brought Paul Eluard, Jean Cocteau, Man Ray and Rosemonde Gérard with him and together they worked out a future full of new modes of expression in front of the beauty of the Lérins islands. The story goes that one night when the genius took hold of him, Picasso painted the entire walls of his room. Unfortunately, the artist was unknown and the hotel owner was very unhappy and forced him to repair the outrage. 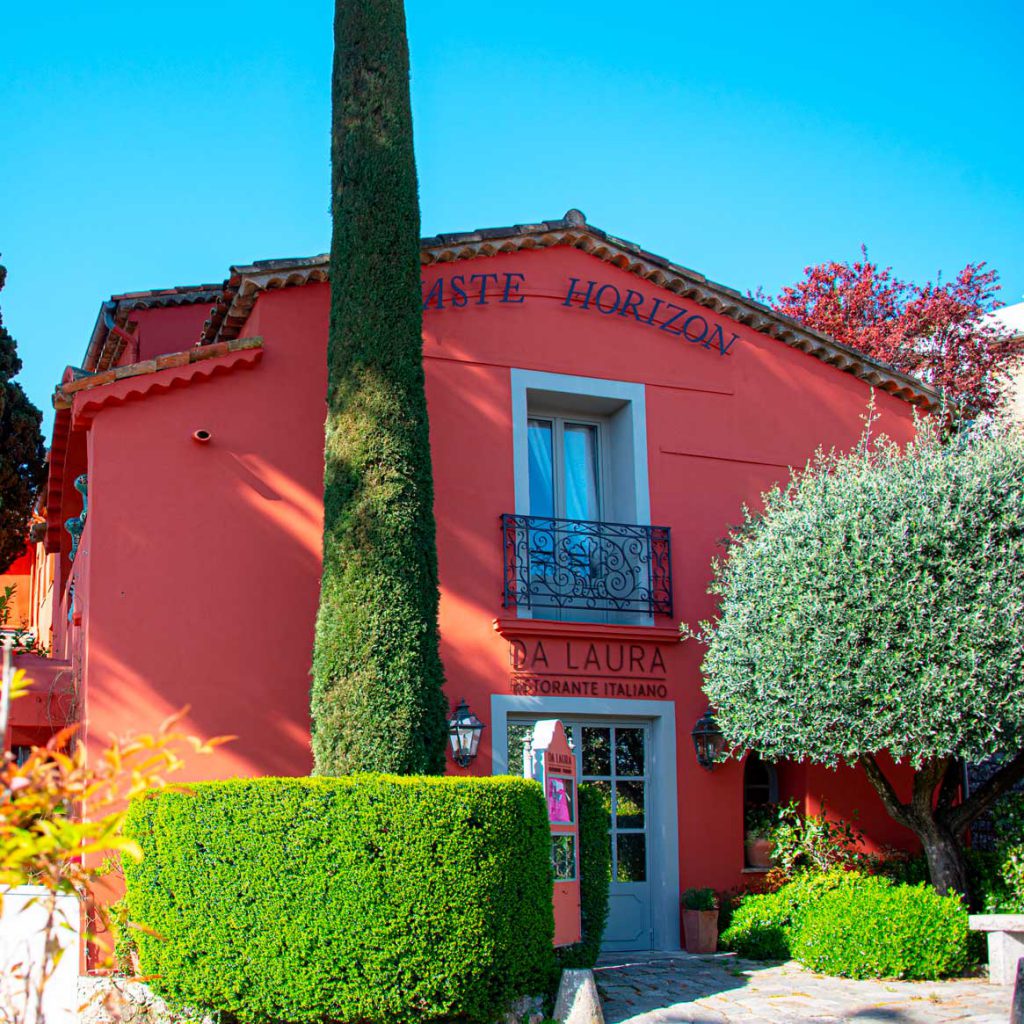 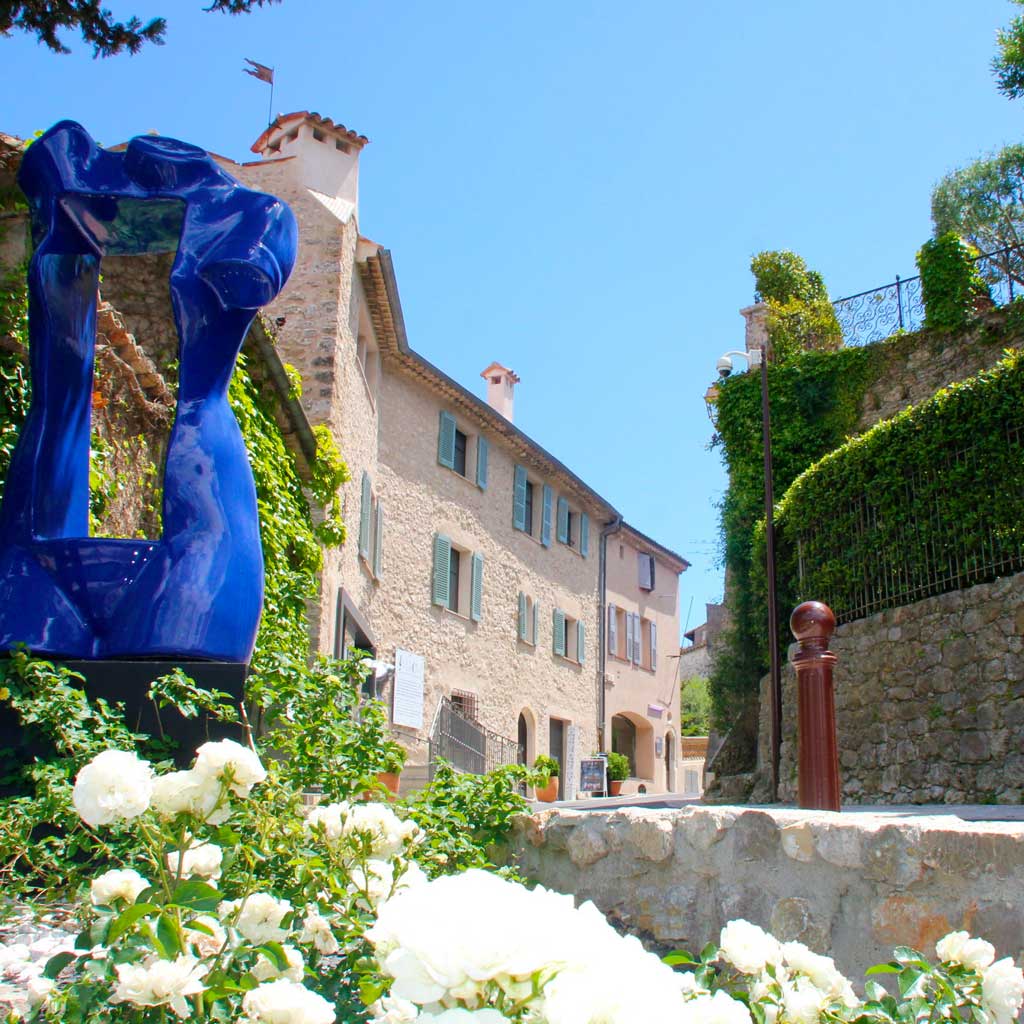 This street was laid out in the glacis that surrounded the Village. Here you can admire an art studio before reaching the Place du Lieutenant Isnard again. From this square, you used to enter the town via the Sarrazine Gate and the Isnard Gate. The latter, demolished in the 18th century, was located at the top of the present Rue du Colonel Roustan.

In the Middle Ages, it was the end of the road coming from Grasse and passing by the old fountain. It was named after “Colonel Roustan”, a Mougin hero who lived in the villa “Santa Lucia”. This residence also housed Roland Petit, Zizi Jeanmaire, Yves Saint Laurent, Paul Anka… On the way up, you walk along the remains of the old rampart and the covered way, to arrive at Place des Mûriers. 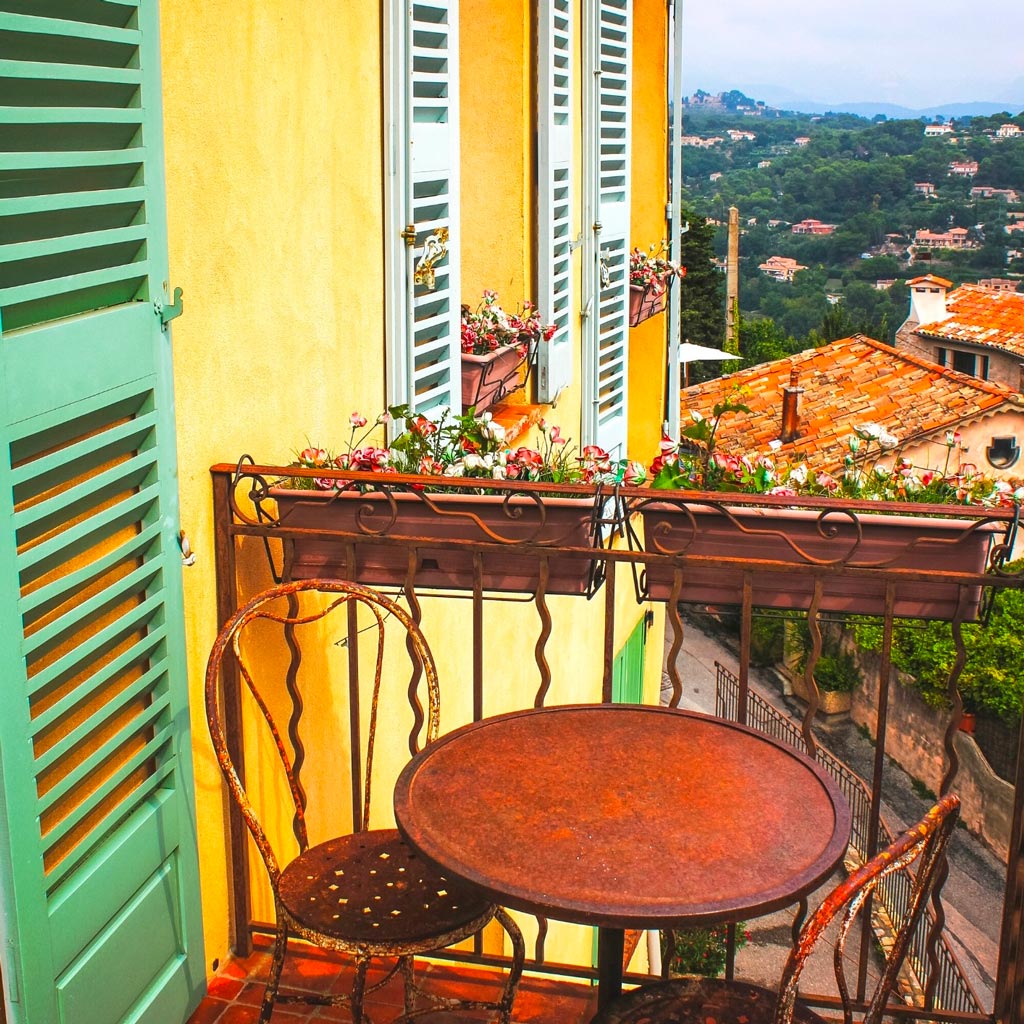 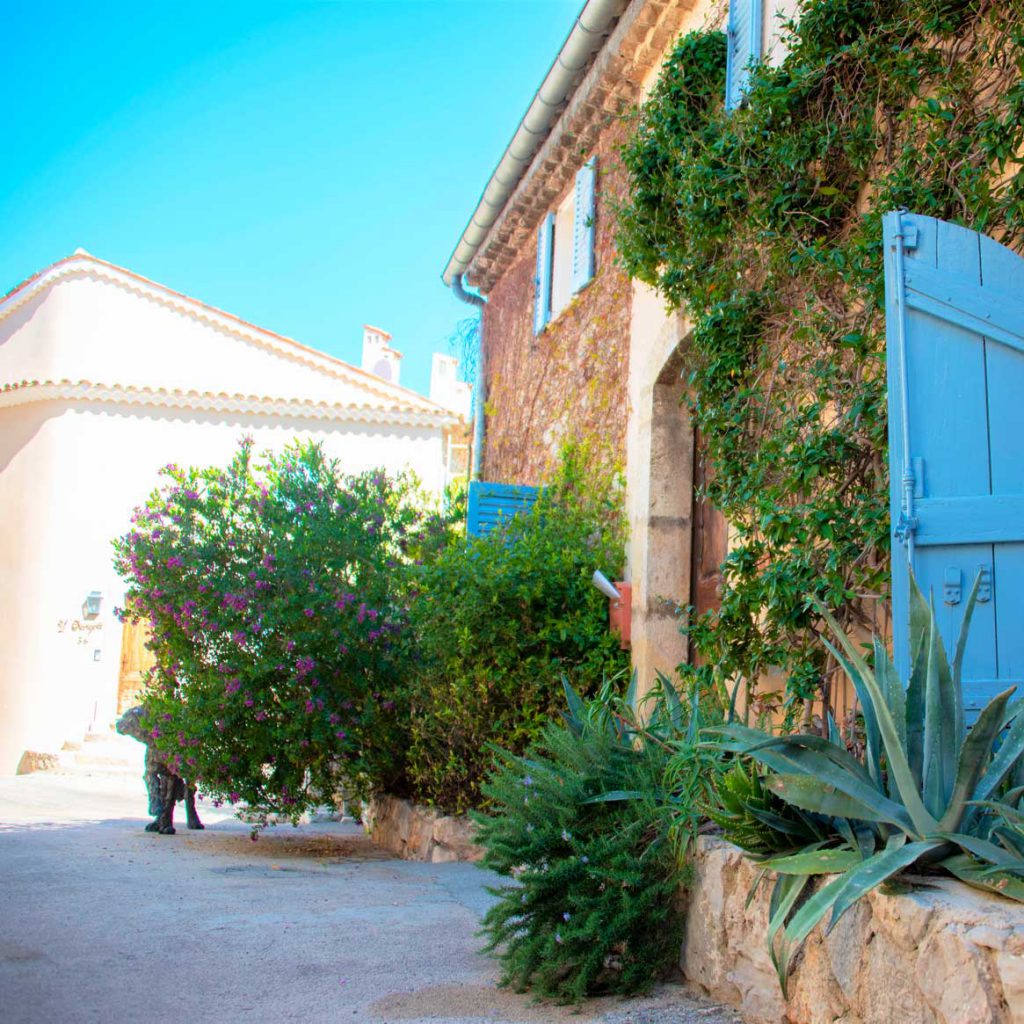 The house where Commandant Lamy was born (n°36), the old tower was home to a barber-weaver who had the formidable honour of shaving, among others, the big-hearted bandit Gaspard de Besse, whom we find in Maurin des Maures and who was beaten in Aix-en-Provence in front of the weeping population. Nearby, an artist’s studio has opened its doors. The Place des Mûriers, formerly Place Saint-Pierre, was surrounded by ramparts. On the right, the rue du Moulin with the old oil mill known as “Moulin Isnard” transformed into a restaurant thanks to the master chef Roger VERGE.

Further on is the Placette de l’Eglise, where the only gate in the village that has stood the test of time can be found. It is improperly called the “Saracen Gate”. The adjoining house was successively the former Town Hall and the school. A room on the ground floor was used as a prison. 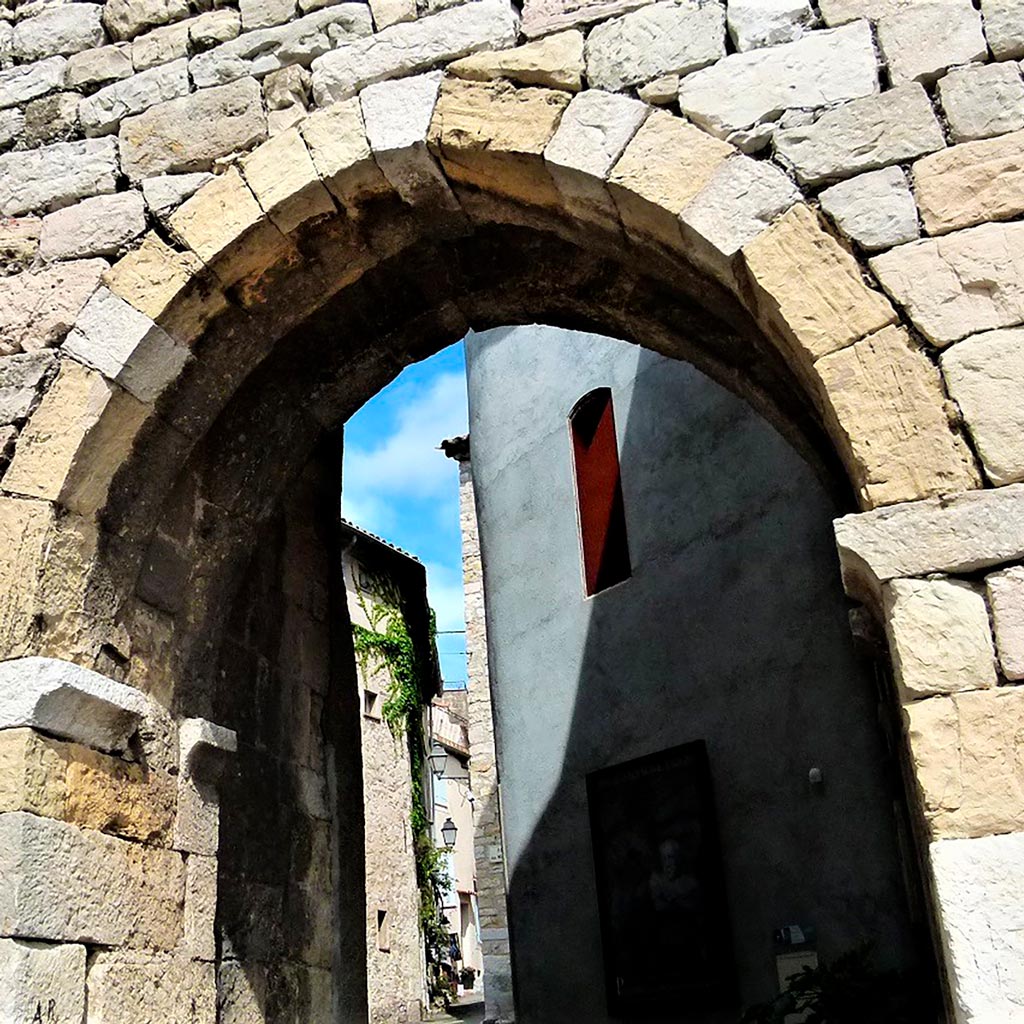 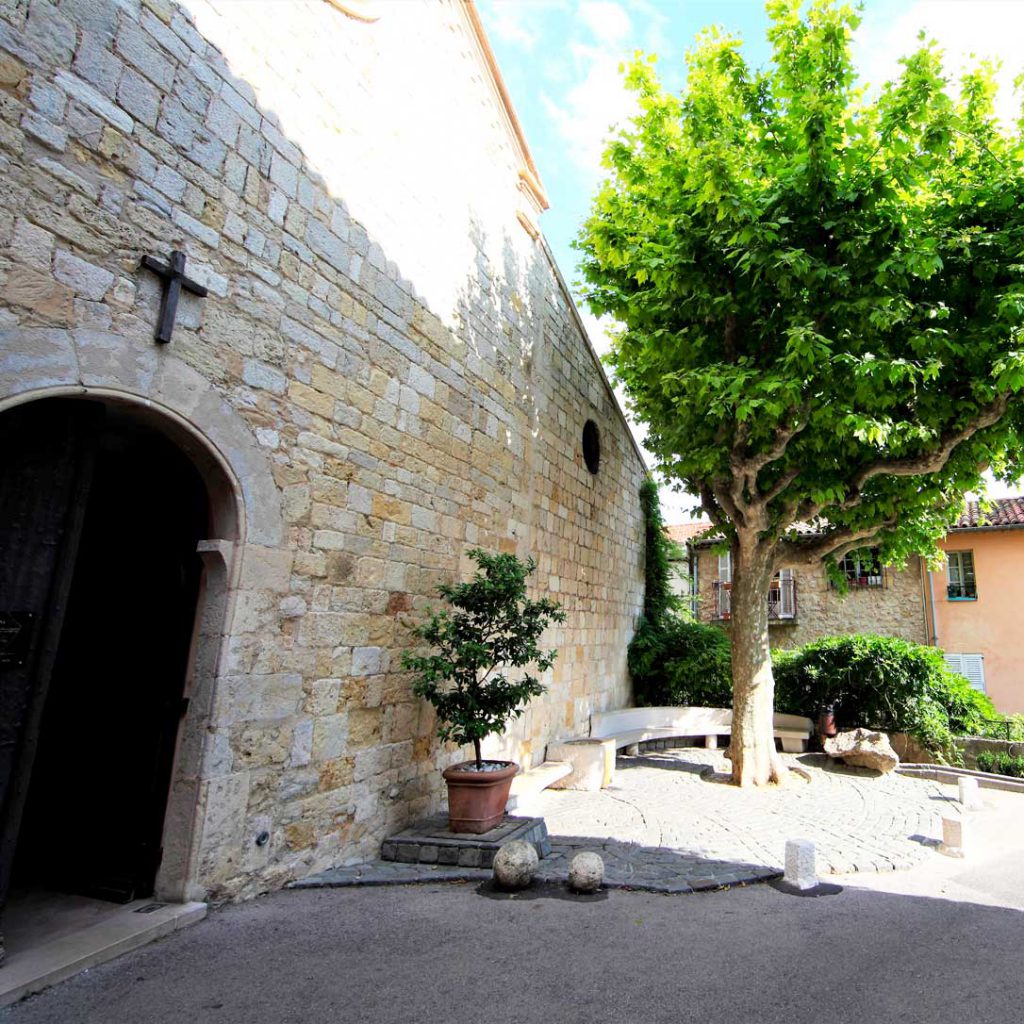 It was an old cemetery, inside the walls. It was then transferred to Place Sainte-Anne and dug out to build a water reservoir in the basement, which was fed by a “fire pump”, which sent the water from the Horts de la Salle spring (Mougins’ first water supply) back to Mougins. On the right, the Presbytery rebuilt before the revolution on the site of a cesspool and a former “blood mill”. Opposite, an old defence tower that stood against the ramparts. You can spend some time in the church of Saint-Jacques-le-Majeur.

The parish church of Saint-Jacques-le-Majeur 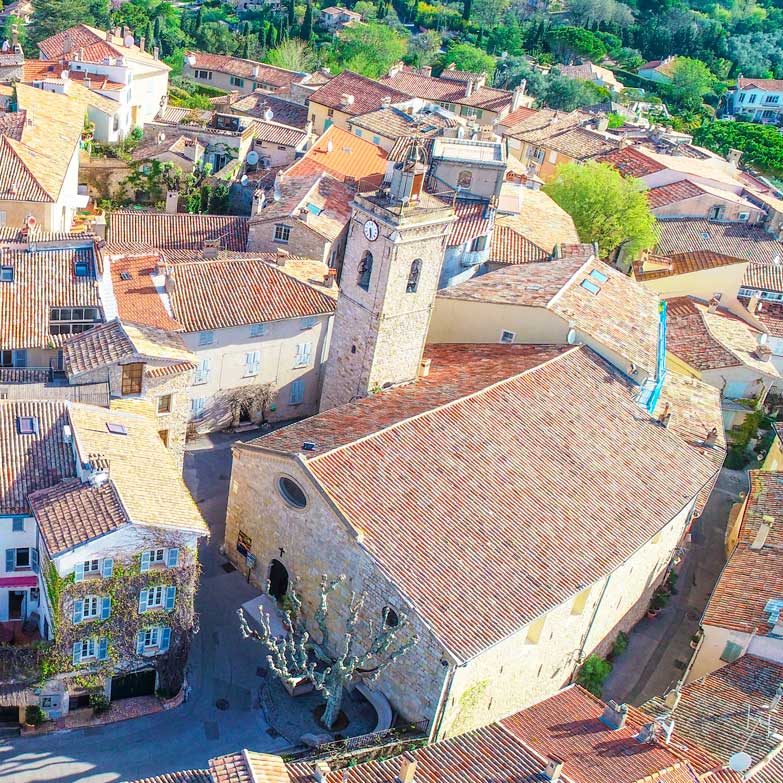 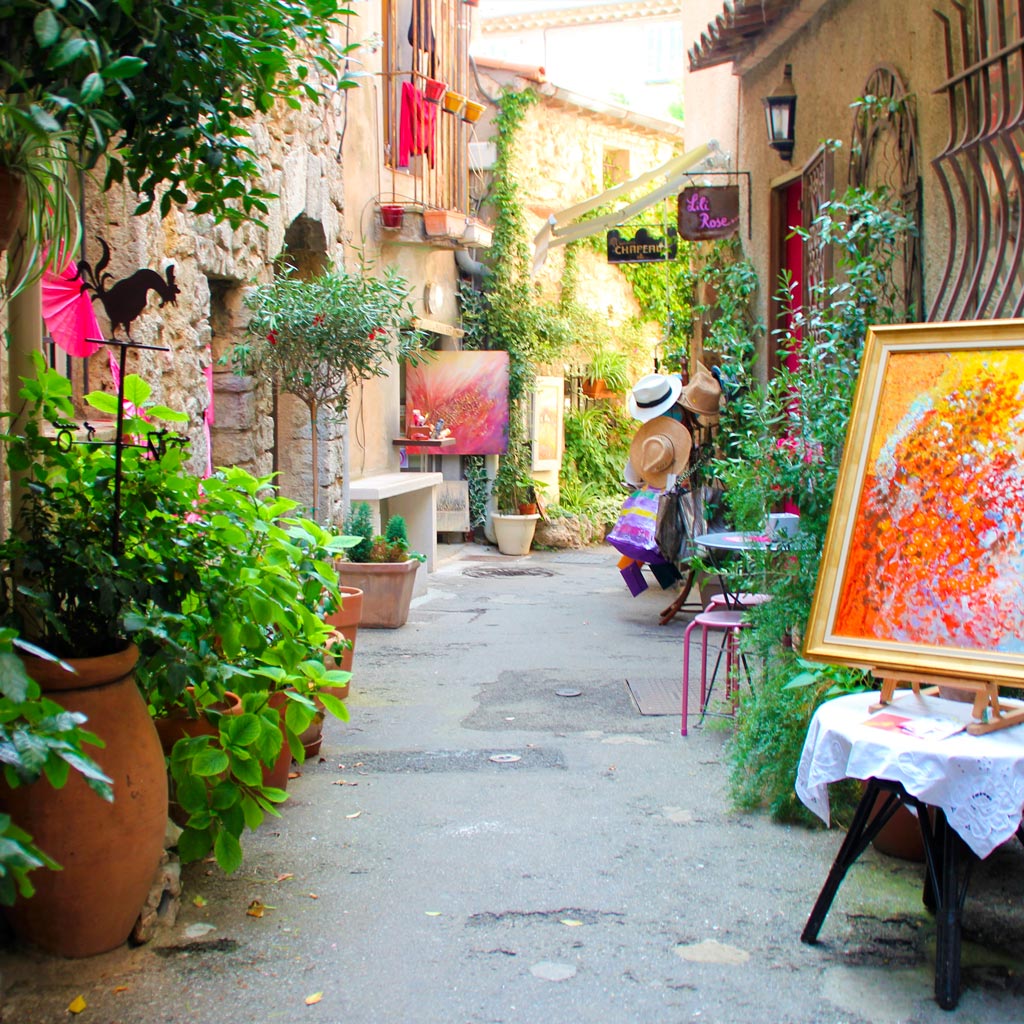 It was an alleyway backing onto the ramparts inside the village. There were many craftsmen and notably a goldsmith, Bernardin Bareste. In 1666, he was certainly the only goldsmith in the region and he beat the gold coins of the Abbey of Lérins. Today, you will still find many craftsmen.

On your right you can see the entrance and the main courtyard of the Abbey House of the Abbots of Lérins. At n°71 Jacques Brel is said to have stayed there while he was taking his pilot’s licence. Finally, take rue Honoré Henry which will bring you back to the starting point. 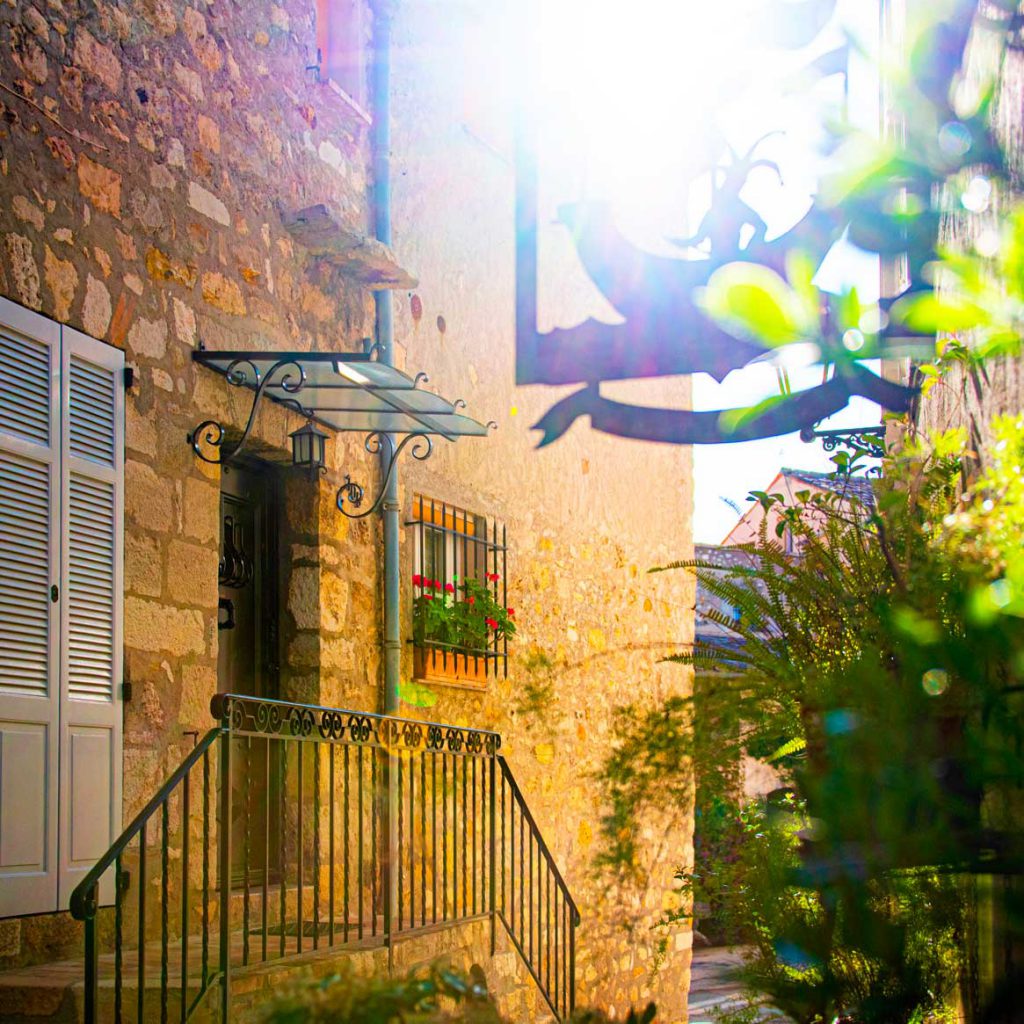 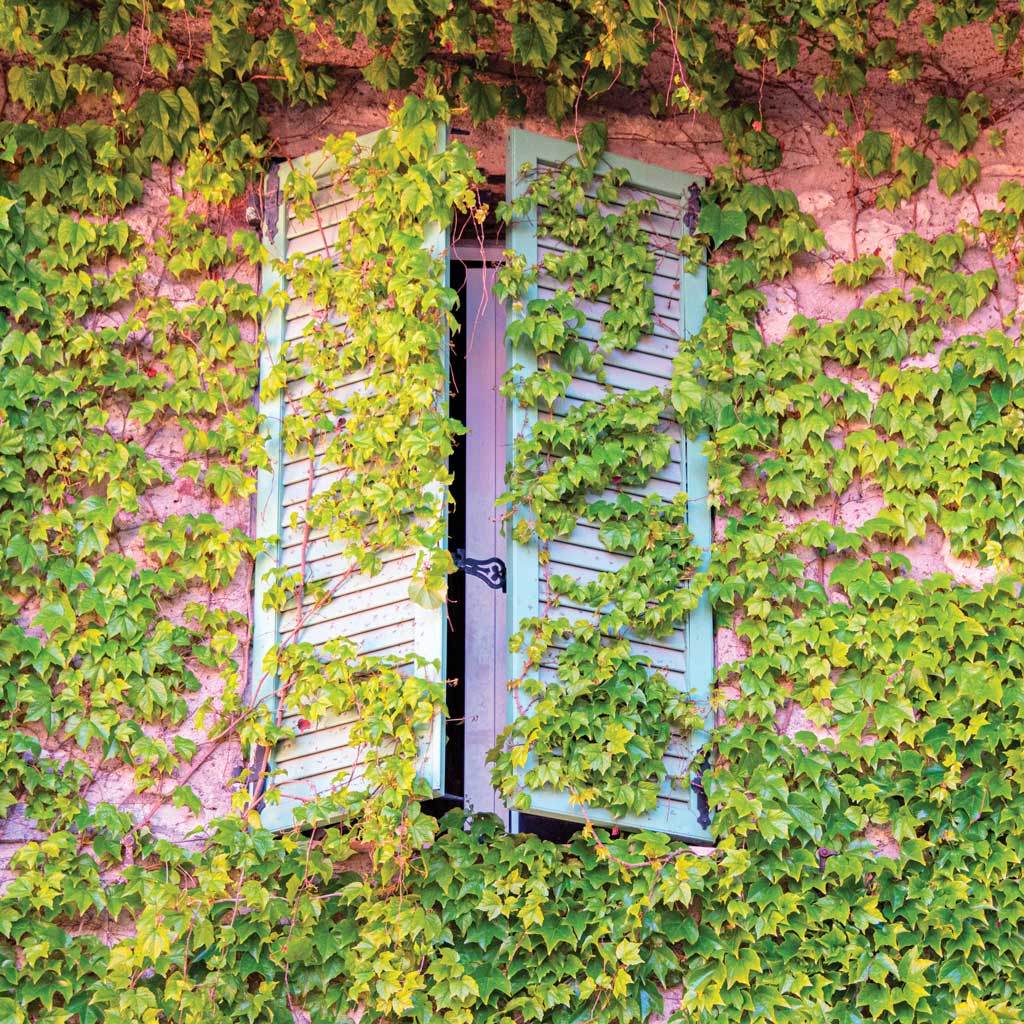 It was named after Honoré Henry, former Mayor of Mougins. After reaching the Place du Commandant Lamy, head towards the Place des Patriotes.

The Lavoir, built in 1894, was used by tenacious washerwomen until the 1970s. It hosts exhibitions all year round and a Provencal cot in December. Opposite, the Boutique du Maréchal Ferrant and the former municipal slaughterhouses on the ramparts have been transformed into an art gallery and bar, whose vaulted room is worth a visit. The square itself was built on the former cemetery of Sainte-Anne. The chapel of the same name, which stood opposite the restaurant “L’Amandier”, has unfortunately been destroyed. 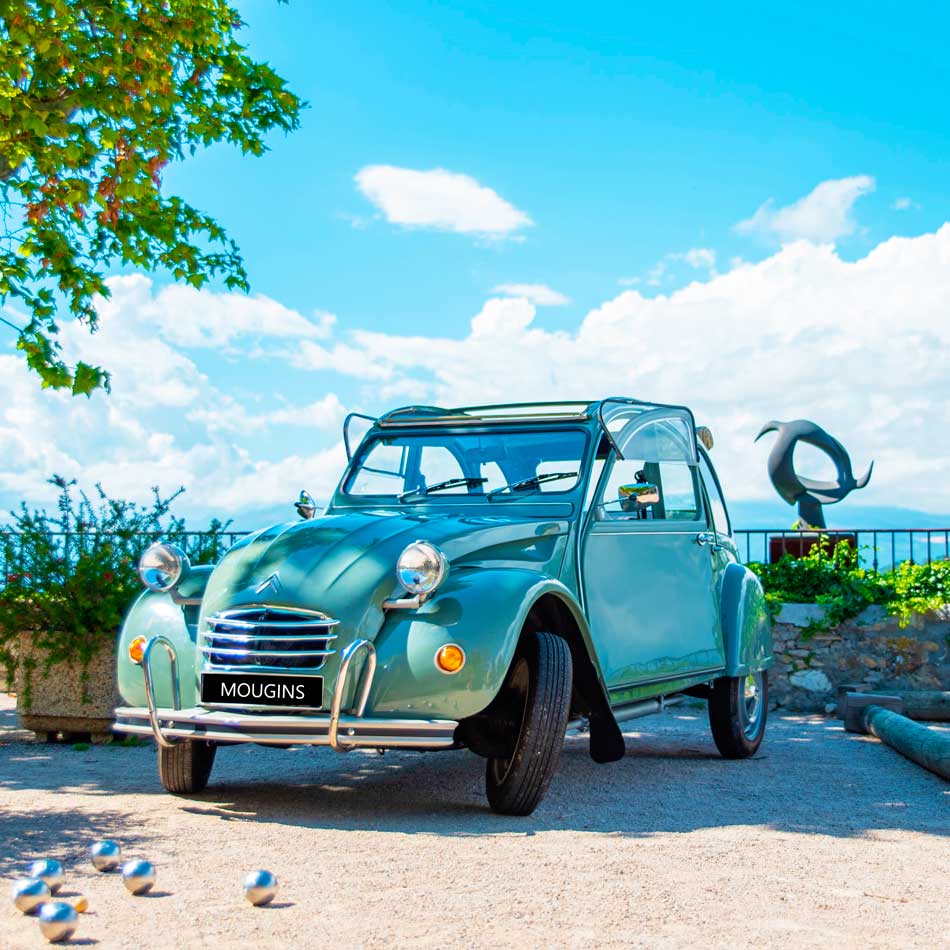 This is where the walk on the rocky outcrop ends; we hope it has allowed you to relive a little of Mougins’ past.

For more anecdotes and information, don’t hesitate to choose a guided tour in the company of our trip advisor… Tap here

This website uses cookies to improve your experience while you navigate through the website. Out of these, the cookies that are categorized as necessary are stored on your browser as they are essential for the working of basic functionalities of the website. We also use third-party cookies that help us analyze and understand how you use this website. These cookies will be stored in your browser only with your consent. You also have the option to opt-out of these cookies. But opting out of some of these cookies may affect your browsing experience.
SAVE & ACCEPT
Share This